I met my husband walking across the country, and it turns out you learn a lot about a person by walking 15+ miles a day with them. At the time, he was a 20-something guy into sports and healthy(ish) eating and I was into academics and pizza (I know, I know… the processed grains and vegetable oils… I cringe).

After our walk, we had the chance to travel to Europe where my pizza and PB&J habit caught up with me and I got a horrible head cold on the flight over. I landed with an ear infection, cough and sore throat.

Always one to be prepared, he had natural remedies with him on the trip and he force fed me some horrible tasting Echinacea tincture. At that time, I was one to turn to antibiotics if I got sick, but that wasn’t an option in a foreign country where I didn’t speak the language and definitely couldn’t navigate the medical system so I took the nasty tasting tincture.

To my shock, it worked and I bounced back pretty quickly (yay younger genes and natural remedies!).

Moral of this story?

Echinacea was one of the first herbs I researched at that time and I can’t believe it has taken me this long to write about it.

Echinacea Purpurea is a flowering plant native to many parts of the US and other warm climates. You’ve probably seen it without realizing it: 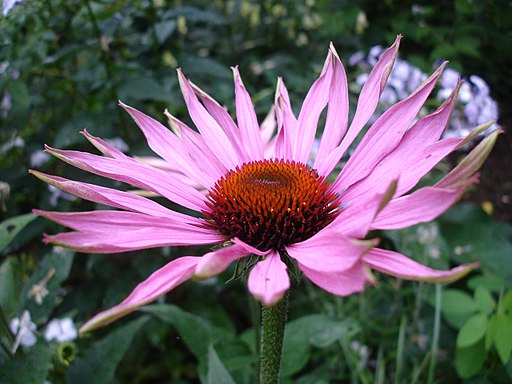 It’s leaves and root can both be used in herbal medicine and it is said to support the immune system.

It has historically been used by traditional cultures as a remedy in various ways:

Echinacea was widely used by the North American Plains Indians for its general medicinal qualities. Echinacea was one of the basic antimicrobial herbs of eclectic medicine from the mid 19th century through the early 20th century, and its use was documented for snakebite, anthrax, and for relief of pain. In the 1930s echinacea became popular in both Europe and America as an herbal medicine. According to Wallace Sampson, MD, its modern day use as a treatment for the common cold began when a Swiss herbal supplement maker was “erroneously told” that echinacea was used for cold prevention by Native American tribes who lived in the area of South Dakota. Although Native American tribes didn’t use echinacea to prevent the common cold, some Plains tribes did use echinacea to treat some of the symptoms that could be caused by the common cold: The Kiowa used it for coughs and sore throats, the Cheyenne for sore throats, the Pawnee for headaches, and many tribes including the Lakotah used it as an analgesic.

Modern research is still divided on the effectiveness of Echinacea, but there is ample folk evidence of its effectiveness. Of course, it is important to check with a doctor or medical professional before using this or any herb, especially in cases of disease, medical problems, pregnancy or in children.

Related Post:  How to Break Your Sugar Addiction, Remove Parasites from Your Body and Put Your Weight under Control with 2 Ingredients

The book Nutritional Herbology points out:

The proven actions of Echinacea are due to water-soluble polysaccharides. They act by sequestering the attacks of various microbes and allow the body to heal itself. Upon reaching an infected area, the polysaccharides have an immunostimulant effect, which results in the production of leucocytes (white blood cells). The resulting phagocytic action of the leucocytes effectively eradicates a number of infectious organisms.

Echinacea is widely used to fight infections, especially the common cold and other upper respiratory infections. Some people take echinacea at the first sign of a cold, hoping they will be able to keep the cold from developing. Other people take echinacea after cold symptoms have started, hoping they can make symptoms less severe. The people who use echinacea to treat symptoms have the right idea. Research to date shows that echinacea probably modestly reduces cold symptoms, but it’s not clear whether it helps prevent colds from developing.

I prefer to buy Echinacea Purpurea herb and make my own remedies as needed but many pre-made remedies are now available.

Related Post:  Are You Suffering From Constipation, Bloating And Gas? Press This Point And You Will Solve Your Problem In Less Than A Minute

Those with autoimmune disease should be careful in using Echinacea or many other herbs. Chris Kresser explains:

Why? Because autoimmune disease is not only extremely complex, but also highly individualized. Hashimoto’s in one person is not the same as Hashimoto’s in the next person. In one person, Hashimoto’s could present as a Th1-dominant condition. In another, it may present as Th2 dominant. In still another, both the Th1 and Th2 systems might be overactive, or underactive. And each of these cases requires a different approach. For example, botanicals like echinacea and astragalus stimulate the Th1 system. If someone with Th1 dominant Hashimoto’s takes these herbs, they’ll quite possibly get worse. On the other hand, antioxidants like green tea and Gotu Kola stimulate the Th2 system, and would be inappropriate for those with Th2 dominant Hashimoto’s.

I only use Echinacea if absolutely needed with my Hashimotos and usually turn to Vitamin C and garlic instead. If you suspect an autoimmune condition, make sure to only use immune stimulating herbs under a doctor’s care.

Echinacea should also not be used by pregnant women as there is not adequate research about its safety and since it can cause immune reactions. Nursing moms should also be cautious with echinacea and children should not use echinacea without a doctors care.

Have you ever used Echinacea? Did it work for you?